After some brief introductory remarks (text shown below), Mary Claire turned the floor over to special guest, Maria Cooper Janis, daughter of Hollywood icon, Gary Cooper. (Mary Claire writes about Cooper, along with eleven other legends of Hollywood, in her book.)

Maria graced the audience with her elegant and captivating presentation in which she shared poignant stories and observations about her father and his journey of faith, especially in later years when it enabled him to become closer to “his girls” and to give back for all of life’s blessings. And, she commended Mary Claire’s book.

As Mary Claire writes in Oasis, in the words of Ma York, “Coop” realized “a little religion wouldn’t do him no hurt.” And, in fact, it did him and his family great good. 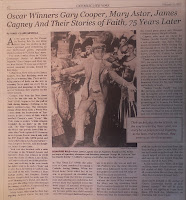 Coincidentally, as Maria pointed out, the street on which the event was being held, was named after the title character in the film Sergeant York (1941), for which Cooper won his first Best Actor Oscar 75 years ago, almost to the day, as Mary Claire noted in her remarks and in her recent Catholic New York article.


Attendees included, among many others, David J. Smith, Executive Director of  The Leo House, who recounted Mother Dolores Hart’s visit there, noting she will be coming again for an event on May 15. (Mother Dolores wrote the foreword to Oasis.) Also in attendance was Fr. Bill Damroth of St. Francis of Assisi Church in Newburgh, New York, who traveled some 90 minutes into the city just to come to this event and lend support to the author, expressing hope she would keep writing these stories of healing and recovery among Hollywood’s stars. Interestingly, Fr. Bill’s great grandmother was a cousin of Thomas Mitchell, known for Gone with the Wind (1939), It’s A Wonderful Life (1946), High Noon (1952), for which Coop won his second Best Actor Oscar, and Stagecoach (1939), for which Mitchell won the Best Supporting Actor Oscar.

Mary Claire read from Oasis, including the entire Gary Cooper chapter and portions of the Mary Astor chapter. Then, she answered questions for about 20 minutes, noting that Oasis had recently been published in Madrid under the titleTambién Dios pasa por Hollywood. Later, while meeting and greeting the author who signed numerous copies of Oasis and posed for photos, guests enjoyed delicious riesling and chardonnay wine from Lakewood Vineyards on Seneca Lake in Watkins Glen, New York, donated by Mary Claire’s father, Paul. (He grew up in nearby Cayuta, some four hours north of New York City, and a world away.)

Three days before the Oscars we gather here in New York City at lovely Logos Book Store at the kind invitation of Harris Healy. (Thank you, Harris.)

Not exactly sunny California! The sun does still shine in California, doesn’t it?

Three years ago when I covered the Oscars, like now, it was raining cats and dogs, on and off, right up until 2 PM exactly, on Oscar Sunday, just as they opened up the red carpet to the stars at Dolby Theatre on Hollywood Boulevard.

God was surely smiling down on the stars that day. Say what you want, He hasn’t given up on them.  That’s a main theme in my book, Oasis: Conversion Stories of Hollywood Legends.

Ten years ago, almost to the day, I started down this road.  In February 2007, I reached out to Betty Hutton. But she was not long for this world.  That summer, after Newport Life Magazine greenlit an article about the now deceased Betty Hutton, I reached out to her friend, A.C. Lyles. He was a legend at Paramount, having worked there since 1936—and before that at the Paramount Theater in Jacksonville, starting in 1928 at age 10! A.C. knew all the stars. Betty. Gary Cooper, who had helped A.C. get out to Hollywood. James Cagney, who, along with Ronald Reagan, were his best friends in Hollywood. And, Spencer Tracy. (A.C. said my next article should be about Spence and his son John. It was!)

And, before long, A.C. introduced me to Maria Cooper Janis, Gary Cooper’s daughter, who is here with us tonight, and to whom I so grateful for all she has done to help me on this journey.

There are so many to thank. At the top of the list is my late mother Claire who was the first one to suggest the idea for Oasis. (Ironically, today is the anniversary of her mother’s death two weeks before FDR was inaugurated!) So bittersweet. Though, as Mother Dolores Hart, who wrote the foreword to Oasis—sending bouquets of gratitude her way!—told me, she is HERE.

And, Gary Cooper is HERE. And, all the other eleven stars in Oasis—Mary Astor, Bob Hope, and the rest are HERE.

You see, film is art and these stars were the masters of the medium.

This year is the seventy-fifth anniversary—almost to the day that Cooper won his Oscar for playing the title role in Sergeant York (1941). On February 26, 1942, Second Lt. Jimmy Stewart, dressed in his Army Air Corps Blues, presented his good friend “Coop” with the golden statuette for his moving performance in this classic film that mirrored America’s own indecision about whether or not to enter World War II. Stewart had won the year before for The Philadelphia Story (1940).

This year is also the 75th anniversary of Mary Astor winning the Best Supporting Actress Oscar for The Great Lie (1940).


First I’ll read from the Gary Cooper chapter and then after that a bit from the Mary Astor chapter.
Posted by Mary Claire Kendall at 3:11 PM