As we get ready for tonight’s Academy Awards being held tonight at the Dolby Theater in Hollywood, our minds naturally go to great moments in Oscar history. 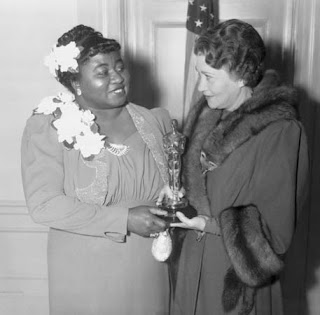 One such moment, which always leaps to mind—and especially tonight, given the #oscarssowhite controversy—occurred at the 12th Academy Awards on February 29, 1940.  Held at The Ambassador Hotel in its segregated Cocoanut Grove and hosted by Bob Hope, poignancy overflowed when Hattie McDaniel won the Oscar for Best Supporting Actress for her role as “Mammy” in Gone with the Wind (1939).

“… This is one of the happiest moments of my life,” McDaniel said in accepting her Oscar. “And, I want to thank each one of you who had a part in selecting me… for your kindness, it has made me feel very, very humble. And, I shall always hold it as a beacon for anything that I may be able to do in the future. I sincerely hope I shall always be a credit to my race and to the motion picture industry. My heart is too full to tell you just how I feel...” As she finished, saying “Thank you and God bless you,” she was gripped with emotion.

Thirty-two years later, on April 10, 1972, another wrong was righted when the Academy honored Charlie Chaplin with “a special Oscar” some 20 years after his banishment from the United States. “I do not want to create any revolution, all I want to do is create a few more films,” Chaplin said at the time. But, he was forgiving and had an equally simple message on this occasion: “Oh you thank you so much. An emotional moment for me. And, words seem so futile, so feeble. I can only say. Thank you for the honor of inviting me here. And, oh, you’re wonderful, sweet people. Thank you,” he said.

A similarly dramatic moment occurred at the 46th Academy Awards, two years later, when Susan Hayward, who fifteen years earlier had won the Best Actress Oscar for I Want to Live (1958), presented the same award to Glenda Jackson for A Touch of Class (1973). Hayward had been rated on par with Sarah Bernhardt. This night was no exception. Only she was not fighting discrimination but illness. 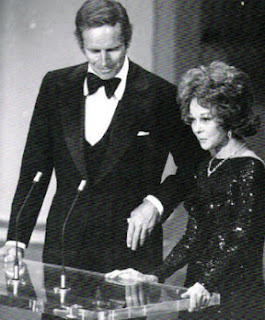 A year earlier she had been diagnosed with multiple brain tumors, and began losing weight and gradually suffered paralysis.  As if that was not bad enough, she was also suffering from lung cancer.

On April 2, 1974, as she arrived at the Dorothy Chandler Pavilion, she was a class act from start to finish, making her grand entrance in her signature sable mink fur. Wearing a Nolan Miller green chiffon gown, graced with Van Cleef diamond necklace, bracelet and earrings, Charleton Heston led her to the podium, as she gripped his strong arm. (The doctor had injected her with Dilantin before she went on stage to avert seizures.) She was such a hit, the Academy invited her again in 1975.  But, as she confided to Miller, this was her last rodeo. Less than a year later on March 14, 1975, she died, gripping the black onyx crucifix Pope John XXIII had given her.

Then there was John “Duke” Wayne’s dramatic last appearance at the Academy Awards on April 9, 1979, when he, too, was ailing.

“Thank you Ladies and Gentleman,” he said. “That’s just about the only medicine a fellow would every really need. Let me tell you, I’m mighty pleased that I can amble down here every night. Well, Oscar and I have something in common. Oscar first came to the Hollywood scene in 1928. So did I. We’re both a little weather-beaten but we’re still here and plan to be around for a whole lot longer.”

Two months later, Duke “bought the farm” and went to his eternal reward, joining Hayward, his co-star on The Conqueror, among films the two made together. Like Hayward, he had also found healing in faith. Ironically, the two had also developed fatal cancer, as with many involved in Howard Hughes’ aforementioned film in the mid-1950s, including also Dick Powell (director) and Agnes Moorehead, likely due to downwind radiation from nuclear weapons testing in Nevada.

In the end, the spiritual gold Hayward and Duke were anticipating was worth the most. As Hattie McDaniel always said, “I did my best and let God do the rest.”  May that spirit infuse tonight’s Oscars and the great work of McDaniel’s fellow actors of all creeds and colors today and always.

This piece was originally published in Townhall.com .

Posted by Mary Claire Kendall at 2:44 PM No comments:

Wanting for Oscar, not Spiritual Gold

The Oscars have not always looked favorably upon Hollywood’s most celebrated stars.

Bob Hope, legendary comedian, television personality, and film star, hosted the Academy of Motion Picture Arts and Sciences awards ceremony a record 19 times, but never won, nor was he nominated for, a competitive “Oscar.” Each year he told signature jokes about this artistic hole in his life, at the Oscars, “or as it’s known at my house: Passover,” he famously quipped.

He did, however, win five special Oscars, including the Jean Hersholt Humanitarian Award at the 32nd Academy Awards in 1960 for his charitable work.

An Oscar for film achievement is, of course, the most coveted. Indeed, the year Hope won his humanitarian award, Ben-Hur (1959) won 11 Oscars, including Best Director (William Wyler), beating out Gigi (1958), which, the year prior, won 9—both exemplifying the towering achievement Oscar recognizes.  But, sometimes, for reasons largely unknown, an artist of undeniable talent, fails to secure this golden recognition from his or her peers.

Ann Sothern, a legendary comedienne, featured in Oasis: Conversion Stories of Hollywood Legends, along with Hope, Hitchcock, Lana Turner and others, got her big break in A Letter for Three Wives (1949). Though the film won two Oscars, Sothern was not even nominated. Afterwards, her prospects, along with the Hollywood studio system, faded. But, as her career spiraled downward, fueled by illness, she looked upward to God and found solace and strength. Finally, after much suffering, she garnered a Best Supporting Actor Oscar nomination for her starring role, alongside Lillian Gish and Bette Davis, in The Whales of August   (1987). Turner, too, received a Best Actress Oscar nod—for Peyton Place (1957)—but, like Sothern, went home empty-handed. Later, also like Sothern, she found healing in God.

But, perhaps the most stunning of Oscar “passovers” is Alfred Hitchcock. Known for Psycho (1960), Vertigo (1958), Rear Window (1954), among other classics, the legendary director was nominated for five Oscars, and though his films, such as Rebecca (1940), won Oscars, he, himself, never won a directorial Oscar.

Hitch did finally win the non-competitive Irving G. Thalberg Memorial Award in 1961.  Then, twenty years later, he won, as with Hope and the others in Oasis, the ultimate prize when he recognized God as the director of his life and embraced the healing power of His grace, winning, that all-important spiritual gold.

By Mary Claire Kendall
One of the more interesting Hollywood stories is how an actor or actress ends up playing an Oscar-winning role.

The unending stories of how the bosses went about casting Scarlett O’Hara in the film version of Gone with the Wind (1939) are, of course, legendary. Thirty-two actresses auditioned to play Scarlett, including Tallulah Bankhead and Paulette Goddard, as well as Lana Turner and Susan Hayward—two of the eight female stars I write about in Oasis: Conversion Stories of Hollywood Legends. Without question, the producers chose right when they picked Vivien Leigh, whose mother, devout Roman Catholic Gertrude Mary Frances Hartley, was praying for her daughter’s success.

God’s hidden mystical power plays an important role in ensuring the right talent is chosen. This is especially clear when the choice is less obvious, as in the case of Lieutenant Colonel Nicholson in The Bridge on the River Kwai (1957).

The producers were flummoxed and, so the stories go, initially wanted Charles Laughton to play the starved, tortured British POW, though his girth disqualified him. Some of the others they apparently considered were James Mason, Ronald Coleman, and Douglas Fairbanks, Jr. But none really captured the imagination.

Then, Sam Spiegel, who had recently struck Oscar gold with African Queen (1951), approached Alec Guinness, the up-and-coming star who had grabbed Hollywood’s attention in David Lean’s Great Expectations (1946) and Oliver Twist (1948), and, more recently, in The Swan (1955), his Hollywood debut. Lean, who was set to direct, balked, as David Brownlow reports in his biography about the famed director, saying, “I don’t think he will give us the ‘size’ we need.” But Spiegel had a hunch—that divine nudging—and invited Alec to dinner to try and change his mind. “I started out maintaining that I wouldn’t play the role,” Alec said, “and by the end of the evening we were discussing what kind of wig I would wear.” The rest, as they say, is history.

Finally, there’s the actor who is made for the role—no questions asked. For one hero, whose life story Hollywood had been badgering him to make since his awe-inspiring heroics in WWI, there was only one actor. The hero was Sergeant York, the actor Gary Cooper. As it so happens, York’s story of faith, compellingly portrayed in Sergeant York (1941), parallels and somewhat inspired Gary Cooper’s own spiritual conversion, about which I also write in Oasis.