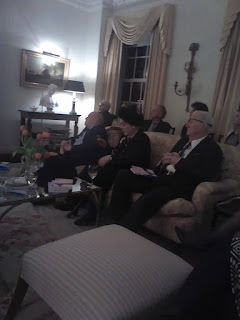 And, thank you Maria for that beautiful and heartfelt introduction.

Writing about Gary Cooper is a great honor and a real pleasure.

His starring roles in some of Hollywood’s greatest films including Sergeant York, Mr. Deeds Goes to Town, The Pride of the Yankees and High Noon, to name just a few, have left an indelible mark on our hearts and souls.

Of course, more often than not, Gary Cooper played the hero.

What we know less well is the hero he was in his own life.

That’s a story I write about in Oasis: Conversion Stories of Hollywood Legends.

I was first introduced to Gary Cooper when I was about 8. It was in that classic “I Love Lucy” episode where Lucy’s friend Carolyn Appleby wants to meet all the stars Lucy has been bragging about hobnobbing with in Hollywood. What to do? Ricky is not quite an A-lister. So, Lucy cleverly misplaces Carolyn’s glasses and then dresses up as the stars, parading out one by one. When Gary Cooper supposedly shows up, all Lucy says is: “Nope.” “Yep.” Caroline knows right away.  The star is none other than handsome, understated “Coop!”

That’s about right—especially when it comes to his spiritual life. As Maria told me, her father didn’t say much about it.

But his actions spoke volumes.

After the “complicated situation” with Patricia Neal, another legend I write about, worked itself out, Coop began going to church more regularly with Maria and her mother Rocky.  And, then, the unthinkable: He became a Catholic, echoing in the words of Ma York, “a little religion wouldn’t do no hurt.” That was spot on.

A year later, Coop became ill with cancer. But, rather than facing the end with bitterness, he faced it with grace and equanimity.

In February and March of 1961, he continued entertaining friends.

By April, his condition began deteriorating. Saturday, April 15, would be the last time he ventured out—on the occasion of the re-marriage of his friend, the director Fred Zinneman to his wife Rene of 26 years.

“In spite of great pain, Poppa wanted to be there for Fred,” his friend since High Noon, Maria writes in her own book, GaryCooper Off Camera: A Daughter Remembers.

On Monday, April 17, a visibly moved Jimmy Stewart appeared at the Academy Awards to accept his friend’s honorary Oscar.  “We’re all proud of you, Coop. We’re all so very proud,” he said, after which, Maria writes, “Jimmy started to break down, and that was the first the public knew that ‘Coop’ was getting ready for his last ride home.”

“I’ll get this to you right away,” Stewart said in closing. “And, Coop I want you to know, that with this goes all the warm friendship and the affection and the admiration and the deep respect of all of us…”

The next day, newspaper headlines around the world blared: “Gary Cooper has cancer.”

Visitors began streaming into the Cooper home in Holmby Hills, and messages poured in from friends and well-wishers around the world, including Pope John XXIII, Queen Elizabeth, John Wayne, Ernest Hemingway, former President Dwight Eisenhower, Bob Hope, and Audrey Hepburn, who had recently starred with him in Love in the Afternoon, among many others.   Even President John F. Kennedy called from Washington, finally getting through after a day of trying.

Friends, expecting to find gloom at the Cooper home, instead found light and sunshine, crisp flowers and cheerful music, as the family faced this profoundly difficult time with faith.

The first week of May, Hemingway memoirist A.E. Hotchner visited Cooper and saw how much pain he was in. Coop told him “Papa” had called him a couple weeks before to inform him he was sick, as well. As he said this, he kept pausing, Hotchner wrote in his memoir Papa Hemingway, because it was so painful to speak. Mustering his dwindling energy, he said he told him, “I bet I beat you to the barn.”

Then, he asked if Hemingway was back at the Mayo clinic, which Hotchner confirmed. With that, the drama heightened:

He was hit by a big pain and his face contorted as he fought it off; sweat instantly covered his face. When the pain had passed, Cooper reached his hand over to the bed table and picked up a crucifix, which he put on the pillow beside his head.

“Please give Papa a message. It’s important and you mustn’t forget because I’ll not be talking to him again. Tell him... that time I wondered if I made the right decision’’ (i.e., regarding becoming a Catholic)—he moved the crucifix a little closer so that it touched his cheek—“tell him it was the best thing I ever did’”

Gary Cooper died of prostate and colon cancer on May 13, 1961, six weeks before Hemingway died. He is beloved for the indelible portrait he gave us of what it is to be an authentic American hero—a portrait that’s incomplete without the story of his last days.

On a personal note, my own mother became ill and died within a month. It was in the summer of 2014—at the very time the deadline for this book was bearing down on me most heavily.  She was my biggest supporter. This book was, in fact, her idea!

Mother Dolores Hart, Maria’s good friend, who was Cooper’s godmother and who wrote the forward to Oasis, later wrote me that my mother is HERE, written in all caps. And, I feel that strongly.

Then, too, all the stars I write about are HERE—in spirit.

And, so I commend to you Oasis. As their lives unfold in the pages of Oasis, I have no doubt, all of them—Hitch, Coop, Hope, Mary Astor, Duke, Ann Sothern, Jane Wyman, Susan Hayward, Lana Turner, Betty Hutton, Ann Miller and Patricia Neal—will be watching over your shoulder as you read about both their highs and their lows and peer into their souls and learn what a marvelous example they all gave us of heroism, including, in such a powerful way, Maria’s wonderful father, the Hollywood legend, Gary Cooper.

Before I close, let me mention some good news I got yesterday. Namely, the Spanish publisher, Edicciones Rialp in Madrid, has just signed a deal to publish Oasis in the Spanish-speaking world.

And, now I’ll be happy to answer your questions and sign a few books.