Today, Wednesday, May 13, I spoke at a private gathering of influential conservatives in Washington, DC.  Oasis flyer was posted on accompanying screens as I spoke. No photos, recordings or videos were allowed, as the meeting is OTR.  Below photo of me was taken shortly after I spoke by a kindly employee in the building around the corner from site of meeting, where I parked. Also, see below for the text of my remarks, as well as notes on my off the cuff remarks at the end. [For more information on the book and book tour, see my website.] 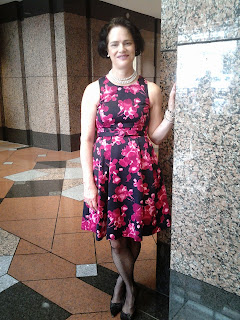 My name is Mary Claire Kendall. I’m the author of Oasis:Conversion Stories of Hollywood Legends, recently published by Franciscan Media.

But, today I’m here to talk briefly about Hollywood, home of American cinema, and the stars we’ve all grown to love and admire.

Stars from Hollywood’s Golden Age, whom some of you may not be so familiar with. BUT YOU SHOULD.

Because, in fact, they were some of Reagan’s best friends, and they helped tell stories of American greatness and straightforwardness that are important to absorb.

My book, with a foreward by Mother Dolores Hart, whom you may have seen on The O’Reilly Factor earlier this year, looks at these stars through the lens of their humanity, telling the story of their lives, the very beats and arc of which show how they were transformed by faith.  In so doing, I am attempting to transform your understanding of these legends, helping you to see them in a whole new light.  As my friend Harry Flynn, who was publicist to many stars, including Bob Hope, said, Oasis shows the soul behind the billboard.

But, first, let’s step back and look at Hollywood through the political lens you are accustomed to.

Hollywood, of course, used to be a denizen of conservative Republicans. It still is, to a certain degree—stars like Kelsey Grammer, and many more, still proud Republications. Though, as we all know, it is not considered quite as fashionable to be a Republican in Hollywood these days as it once was. (Though fashion, like beauty, is in the eye of the beholder.)

But, when Hollywood was just making its mark on the American psyche, it was very fashionable, indeed, to be a Republican. Most of those who built Hollywood belonged to the Grand Old Party. People like Mary Pickford, Louis B. Mayer, Cecil B. DeMille, John Ford, Cooper, John Wayne, Bob Hope, and of course, Ronald Reagan, to name just a few—many of whom I write about in “Oasis.”

Most of the stars I write about experienced some kind of crisis that brought them face to face with their human weakness and their need for God.

In depicting this phenomena, I write the life stories of these stars, because you can’t begin to understand someone unless you know where they came from, what they achieved and how, what their weaknesses and strengths were—and how far they fell, or merely drifted—to understand how incredible their journey and discovery of God was.

It was a privilege to write about these stars, entering into their lives, gaining an appreciation for how much they endured in their climb to the top. Because, believe me, nothing was handed to them on a silver platter. Then came the celebrity and fame. And, what that does to a soul! And, the predictable problems. They were, after all, mere mortals, the Hollywood publicity machine notwithstanding. That machine, in fact, often ginned up as much publicity as problems.

But, then, in the amazing way that God brings good out of evil, these problems, in fact, were what led them to God.


[Then, I added some off the cuff comments, noting that while Hollywood viewed Washington as “Hollywood for Ugly People” and Washington, especially conservatives, view Hollywood as the source of many national ills, the truth is the art of communication, which Ronald Reagan knew so well, was something he largely learned in Hollywood. It’s important to study this art—to get your message out.  Then, I noted, while this book does not cover any policy issues—the point of these meetings being to advance a conservative policy agenda—it does highlight the importance of God and, given the tough times we’re going through—and the gridlock in Washington—if we hope to achieve anything of value to the nation, we certainly need the help of God.]
Posted by Mary Claire Kendall at 12:07 PM